The RELIGION of BRAHMANISM 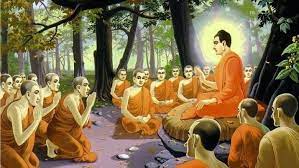 The RELIGION of BRAHMANISM

Brahma means holy word Madhhari Jan-i Jananas Islamic scholar of India, states in his fourteenth letter “Th religion was invented in India centuries before Isa (Jesus) ala salam. It was a true heavenly religion. Its followers became kif (disbelievers) after they corrupted it Brahman is the name of those who are the leaders of the people who believe in this religion. One of the Brahmans was deified. Brahma is said to have four sons. One of them is believed to have come into existence from his mouth and the other three from his hands and feet Because of his four sons, people are divided into four classes by the Brahmans

1) Brahmans: These are the holy monks of Brahmanin Reading and explaining the holy book called Veda and guiding the other members of Brahmanism are their tasks. They have the most influence Nobody can revolt against their orden Everybody fears them

4) Peasants, workers, employees, and so on. Anyone outside these four classes is called “Pariah” A pariah has no night to live a decent life. They are treated like animals. There are idols i Brahmanism. These idols and their meanings, what is catable and uncatable, crimes and the punishments for them are all written their holy book. Manava Dharina Shastra, which means the religious book of Manu). The Brahmans are polytheistic. The greatest God is “Krishna. who is believed to be incarnate eradicate evils. The second greatest God is “Vishnu Vishnu a very important. It means “the thing that can penetrate the huma body Their third God is “Siva. Vishnu is seen as a figure with four hands and its colour is deep blue. It is seen either on its eagle called “Garuta” or on a flower of lotus or on a sma According to Brahmanismo, Vishnu descended into this world nin times in different shapes, such as human, faunal and Boral shapes] He is also expected to descend for a tenth time

In the religion of Brahma, killing creatures is permissible only ewarlike situations. During other times, living creatures, human animal, cannot be killed. Human beings are deemed to be ared creatures. They believe in “transmigration” of the soul That is after a human being dies, his soul will return to this world another shape. Since it is believed that Vishnu could come to as world in the shape of an animal, killing any animal is solutely prohibited. This is why the zealots among them never at meat According to the book Manava Dharina Shastra human life is

Mazhar-i Janan (rahmatullahi ‘alaih), one of the great Islamic scholars of tasawwuf (sufism) in India. wrote “the ceremonies of Indian disbelievers” in his fourteenth letter in the Persian language. He says: “Allahu ta’ala showed all human beings, including people living in India, the way to happiness. He sent a book with the names of Veda and Bid by an angel called Berniha. That book had four parts. The mujtahids (great scholars) of that religion derived six madhhabs from it. They called the section concerning belief Dahran Shaister They divided human beings into four classes. They called the section concerning worships Karm Shaister They divided the lifetime of a man into four periods. Each period was called “juk. All of them believed in the oneness of Allahu ta’ala, the transitoriness of this world, and the Day of Judgement, whereon human beings will be interrogated and punished. They can perform miracles. revelations or divinations by fighting against their own nafs (evil desires within man). The innovations made in this religion by succeeding generations caused them to become disbelievers When Islam appeared, their religion became invalid. The ones among them who did not become Muslim are classified as disbelievers. We cannot comment on the ones who were dead before Islam.”

“Zoroastrianism” is one of the branches of Brahmanism They idolize fire, cows and crocodiles. They are the followers of a false religion established by someone who was called Zardusht

during the era of Kushtusab, one of the Shahs of Persia called Chosroes, and it is unknown if he lived or not. They do not bury their dead. They keep them in specific towers and let vultures eat the corpses. The beard is deemed to be sacred among another group called “Sih.” They never cut their beards. Another group is called “Hinduist.” These people believe in all the myths of the lower classes. These beliefs are so primitive that they are completely off the right course.

Brahmans encourage everybody “to listen to the monks of Brahmanism. to obey their monks, to follow the book Manu, not to associate with the people called pariah, and not to kill any living creature.” They never give any information concerning the soul or body. They believe that human beings are sacred creatures. The river Ganj in India is deemed to be sacred, too. It is a holy task for them to drink the water of this river, to have a bath in it, and to throw their corpses into it.

The religion of Brahmanism needed to be renewed, purged. and updated. The religion of Brahmanism had almost become synonymous with idolatry; they even worshipped some idols Unfortunately, a hundred years later, this religion was completely corrupted by a man named Buddha, who was born 600 years before Isa ‘alaihis-salam. It is possible to compare Buddha with Luther, who abrogated a lot of the myths in the religion of Catholicism, but who also established a new heretical sect called Protestantism.