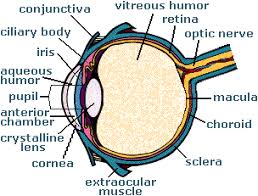 Light is the visible portion of electromagnetic radiation spectrum to which the human eye is sensitive. Light waves travel at a speed of 300,000 kilometers per second. White light is the combination of seven wavelengths and each

wavelength has its own colour. This can be demonstrated by passing the white light through a glass prism, which refracts it, i.e. it bends the rays of the different colours to a greater or lesser extent, depending on their wavelength. Red light has the longest wavelength while violet has the shortest

The Spectrum of Light

The visible spectrum extends from 700 nm at the red end to 400 nm at the violet end. Beyond the long end (red), there are infra-red (heat), radar and radio waves, whereas beyond the short end (violet) there are Ultraviolet (UV), X-rays and cosmic waves. The UV light is normally invisible because it is absorbed by a yellow pigment in the lens .

A specific colour is perceived, when the object reflects only one wavelength and all the others are absorbed, for example an object appears red, when only the red wavelength is reflected. Objects appear white, when all wavelengths are reflected, and black, when they all are absorbed.

In order to achieve clear vision, light reflected from objects within the visual field passes through the following stages: 1. The light rays interring the eye are focused onto the retina by mechanism of:

Focusing of Image on Retina

Light rays coming from a distance (beyond 20 feet) are parallel and do not focus on retina, they need to bend or refract to get focused on retina, to form a clear image of the outside world. This refraction is done by cornea, aqueous, lens and vitreous, which are denser than air.

The light rays coming from a nearby object (less than 20 feet) are divergent, and need additional refractive power to focus on the retina. This additional power is provided by accommodation mechanism of the eye, which includes:

i. Change in the curvature of lens to increase the refractive power.

ii. Change in the size of pupil to control the amount of light.

iii. Convergence of eyes to see an object nearer to the eye.

The photoreceptors, rods and cones serve as the sensory endings, for visual sensation. Light falling on the retina causes photochemical change in visual pigment of rods and cones, which in turn triggers a cascade of biochemical reactions that result in generation of electrical changes called receptor potential.

This phenomenon of conversion of light energy into receptor potential (visual impulse) is known as phototransduction.

Processing and Transmission of Visual Impulse

The receptor potential generated in the photoreceptor is transmitted by electronic conduction (i.e. the direct flow of electric current, and not as action potential) to other cells of the retina via bipolar cells, horizontal cells, amacrine cells and ganglion cells.

The ganglion cells transmit the visual signal by means of action potential to the neurons of lateral geniculate body, and finally, to the primary visual cortex.

The visual impulse i.e. the action potential is perceived in the visual cortex, which results in the following visualperception:

It is the minimum intensity (brightness) of light appreci by the retina.

The ability to see in dim light (dark). the function of rods. The loss of rods causes night blinde fc.g. retinitis pigmentosa.

The ability to see in bright light. It is function of cones. The loss of cones causes day blindn e.g. cone-dystrophy.

It is the ability to discriminate between the shapes of objects. Cones play a major role in this facity. The sense is most acute (sharp/clear) at fovea, which con maximum number of cones. Visual acu measure of the form sense. Loss of cones uses decr in visual acuity c.g. cone-dystrophy.

It is the ability of the eye to perceive changes in the luminance between regions which are not separated by definite borders. Loss of contrast sensitivity results in fogginess of vision.

Contrast sensitivity may be impaired in the presence of normal visual acuity.

It is the ability of the eye to discriminate between different colours excited by light of different wavelength. Colour vision is a function of the cones and thus, better appreciated in photopic vision.

It postulates that there are three types of cones, each containing different photo pigment, which is maximally sensitive to one of the three colours (wavelength) via red, green and blue. These three colours are called primary colours. All other colours are formed by varying mixture of the three primary colours. When all the three types of cones are equally stimulated, they produce white colour.

Colour vision is tested by:

It is the inability to recognize the colours. It may be:

It occurs due to the absence of red, green or blue pigment in the cones. It is a bilateral and incurable..

It occurs due to disease of macula and optic nerve.